When it comes to how the tangle of world languages affects the ability of a farmer in Kenya to find out what she needs to know to improve her life, Lori Thicke is the go-to expert. As founder and president of Translators without Borders, Thicke has spent twenty years taking down the language barriers that stand between a subsistence farmer and a higher crop yield, between a young man in Uganda and his dreams of building an electricity generator, between a South African girl and the information she needs to keep herself safe from the AIDS virus.

Lori Thicke’s speaking engagements have included audiences in Barcelona, Berlin, Boston, Borneo, Brussels, Dublin, London, Luxembourg, Miami, Nice, Paris, Portland, Saint Raphael, San Jose, Santa Clara and Seattle.  Across the globe, Thicke has been raising awareness of the single most cost-effective way to fight poverty: information in the right language. With infectious enthusiasm she has infused audiences with hope for the future where a cellphone can give a poor farmer the sum of all human knowledge in the palm of her hand.

Thicke’s interest in languages was sparked when she moved to Paris at the age of 27, fresh out of graduate school. Intending to write the Great Canadian Novel, she instead discovered the power of languages. She went on to found Lexcelera, a translation company that today operates in Paris, in London, and in her hometown of Vancouver, as well as the world’s leading translation non-profit, Translators without Borders. 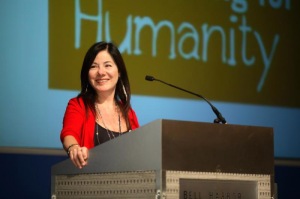 Translators without Borders currently donates hundreds of thousands of dollars worth of pro bono translations each year to support humanitarian work across the world.

5 thoughts on “About Lori”