When the gunshots started this morning, I found out why people turn to Twitter in a crisis.

It was 11 am in the usually safe city of Vancouver. I had just walked in through the lobby and now I looked out our 29th-floor windows to see people racing for cover. Two women who were caught out in the open ran down the dock and hid by the boats.

After calling 911, I checked the news sites to see what was going on. Nothing. Ditto Facebook. Then I checked Twitter, hashtag #Vancouver. People were already live-tweeting the firefight.

Then I saw a tweet with a picture. It was my building, and the lobby I had passed through earlier now had its windows shot out.

This was my epiphany. Suddenly I got how important Twitter is during a disaster, and why the UN, Humanity Road and others call on Translators without Borders for urgent Twitter message translations.

When Super Typhoon Haiyan, one of the strongest tropical cyclones ever recorded, plowed through the Philippines, killing up to 10,000 people, Twitter played a role in the crisis relief.

Most of the tweets about Typhoon Haiyan (or Yolanda, as it was known locally) were sharing information.

As the disaster unfolded, one of our partners, the Standby Task Force, was able to map the damage by monitoring Twitter so that the first responders knew where their help would be most effective.

On the ground, people were using Twitter to request help. One such message that Translators without Borders translated from Tagalog into English meant that two children were located and taken to safety.

Survivors took to Twitter to tell their families they had survived. On the other side, family members used Twitter to search for friends and family, as in this heart-breaking tweet: 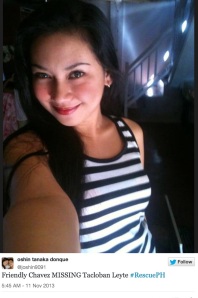 Aid groups used Twitter to fundraise for the relief efforts and to recruit volunteers. The Philippines Red Cross tweeted: 10:08 AM – 10 Nov. We are in need of volunteers for relief packing at the National HQ in Port Area. For immediate deployment.

Even celebrities used Twitter to get their fans to donate:

A report by Radian6 concluded that “super typhoon Yolanda”, “Yolanda” and “Haiyan” were mentioned a whopping 3,243,826 times:

Today, the #Vancouver tweets followed the gun battle up the street, and continued until the suspect was captured. Each time there was a new development, the twitterverse beat the news outlets by an hour or more.

In a crisis, that hour would cost lives.