English Africa, French Africa, Portuguese Africa. We are accustomed to using these terms to designate different countries of Africa. Kenya is considered an anglophone country while Mali is universally regarded as francophone. But do these terms accurately describe the reality?

In fact, these terms are misnomers according to Sozinho Francisco Matsinhe, the Executive Secretary of the African Academy of Languages (http://www.acalan.org/). He was speaking at the Action Week for Global Information Sharing conference in November, 2011,  held at the UN Conference Centre/UNECA in Addis Ababa, Ethiopia.

“The former colonial languages are spoken by a very small minority elite, not the majority of the people in Africa.”

This elite tends to be educated and located in the urban areas, not the villages where the majority of Africans reside.

In “The status of languages in multilingual societies” William Mackey tells us that some 90% of Africans “have no knowledge of the official language of their country even though it is presumed to be the vehicle of communication between the government and its citizens”. This means that for up to 90% of Africans, language is a barrier. A century after independence, Africa is still a colony, linguistically speaking.

“Though spoken by a small minority confined to urban areas, the former colonial languages are given preferential treatment in all domains, including cyber space, at the expense of the African languages spoken by the vast majority of Africans,” Matsinhe points out.

Gregory Kamwendo of the University of Botswana warns us to be careful of using classifications such as anglophone or francophone Africa.

“If you go out to the villages, you will not see people speaking English or French.”

Yet governments and non-governmental organizations (NGOs) alike cling to the idea of an Africa that can be divided into English, French and Portuguese-speaking areas. This may partly explain the failure of aid programs so far to make poverty “history”.

“True development can only take place when it is embedded in the languages of the people.”

Development efforts in Africa have long been conducted as if everyone in Africa spoke a European language. Every day, all across Africa, aid is being delivered in the language of the donors, not of the beneficiaries. 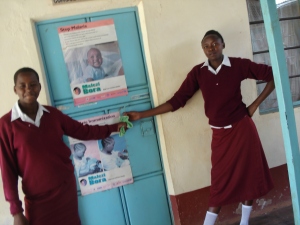 In Thange, Kenya, AIDS orphans play in front of a poster that promotes healthy practices. Like the only healthcare manual that sits in the dispensary, the poster is in English, a language the Kamba-speaking villagers barely understand.

“Community-based development won’t happen unless we engage the people in the language they know best. If you go to the rural areas in Africa speaking English, French, Portuguese, you are speaking to yourselves because no one understands you,” says Matsinhe.

11 thoughts on “Everyone in Africa speaks English. Or do they?”